Monday.com is one of the most widely-used project managers in the world. It has a very slick and simple interface, which offers a ton of features to make the managing of large groups of people as simple as it can be. The main objective of Monday.com is to help companies establish a solid work environment between different departments, so it keeps track of various things relevant to the running of a company.

The platform has been around for less than a decade, but it has made a massive impact in the world. It’s used by hundreds of companies from various countries, as it supports any type of work environment. It’s not limited to financing or marketing, for example, it could be used to run almost any type of company.

Originally known as dapulse, Monday.com was founded in 2012 and officially renamed on 2014. Their objective has always been to make the life of its users easier, which is done by presenting a set of powerful tools that help you create a solid virtual and professional environment.

How Does Monday.com Work?

Simply put, Monday.com is a cloud software that allows many users to contribute to a single project at the same time. Thus, it’s not designed to suit the needs of large multinational companies, but it does an amazing job at helping small to mid-sized businesses to stay better organized.

Part of what makes Monday.com such an effective tool is its design. You can access every feature without having to scroll through various pages, as they’re all presented in a very organized manner. Having a solid interface is an essential part of any project manager – something that Monday.com is able to provide to its users.

Why Use Monday.com Instead of Other Project Managers?

It’s not all about ease-of-use when it comes to what Monday offers. The platform is also known to be one of the most affordable project managers in the world, with a subscription of just $25 a month. It comes with a set of integrated searching capabilities that you won’t need to pay extra money for, and there aren’t any hidden fees attached to the service.

They do offer various plans, but each of them offers great value for money when considering all the features that are offered. We’ll take a deeper look into plans and pricing later on, but these are definitely some of the best reasons as to why you might prefer Monday.com over other programs, such as Trello or Asana.

Apart from this, Monday.com also offers a ton of customization features when it comes to working with the interface. You can create different columns and work assignments, so people from different departments know when the rest of the work is done and when they can start their own assignments.

This allows the work of the entire company to be streamlined, even when departments aren’t located in the same building. In fact, Monday.com offers full support to companies with freelancers, as it’s very easy to coordinate work with all employees.

The Good & The Ugly – The Pros & Cons of Monday.com

Now that you know what makes Monday.com a superior project manager than most of its competitors, it’s time for us to dig deeper into what the platform has to offer, and why you might not like some of its features. To start this, we’ll take a look at the benefits and drawbacks of the platform.

The Most Important Features of Monday.com – What Makes It Such a Good Project Manager?

Even though Monday.com is an overall complete and efficient tool, it has some aspects that make it a great project manager. Some of these things might feel they lack functionality, and that might be true in some cases, but once you get the hang of all its features it’ll be easier to work with the project manager without struggling at all.

Monday.com emphasizes the importance of a well-presented interface by having all information shown in a clean manner – users will not struggle to determine which projects are pending, nor will they have to navigate through complex menus to find a task or an assignment.

Likewise, the whole interface is presented in various columns that make up the menus of the software (each with a distinctive color of its own). This makes for quick navigation and ease of understanding that is very difficult to find in other platforms. Monday.com feels like the most understandable project manager on the internet, so it’s a good choice for most small to medium organized companies.

If you like the way Windows handles files and folders, you’ll love the features of Monday.com. Most of the things that you see on your page’s interface can all be changed and fully customized, at times by simply dragging and dropping stuff through the menus. Yes, it’s that simple. You can even create folders to get a better understanding of how each spreadsheet is going.

The spreadsheets themselves are very well presented and they use simple color guidelines to help you determine when a project is done, when it’s halfway there, when it’s just begun, or when it hasn’t been started. This is all accompanied by clear text, but it’s always good to get a visual idea of how things are going without having to read each box individually.

Furthermore, Monday.com seems to emphasize the use of colors on its platform. We feel like it gives the program an unparalleled ease of use that no other project manager is able to offer.

As an additional benefit, Monday.com offers users the chance to integrate the platform with many of the most popular apps and programs on the market. This is all support via the inclusion of API access. You or your staff will be able to modify the platform to its core and integrate programs like Excel into its systems if you are knowledgeable on API.

There are also other features that allow non-tech savvy users to have a go at app integration. The site is supported by a program called Zapier, which gives users a set of ways in which they can add programs to the platform’s code without having themselves any knowledge about programming. You’ll need to find compatible software with Zapier, of course, but it’s always good to have an extra option.

You even have external apps that are fully supported by Monday.com and don’t need you to have a go at coding or any other things to keep them running on your projects.

As a side note, you might need to be subscribed to the most expensive Monday plans before getting full access to external apps and the addition of API customization. These plans can be quite expensive. 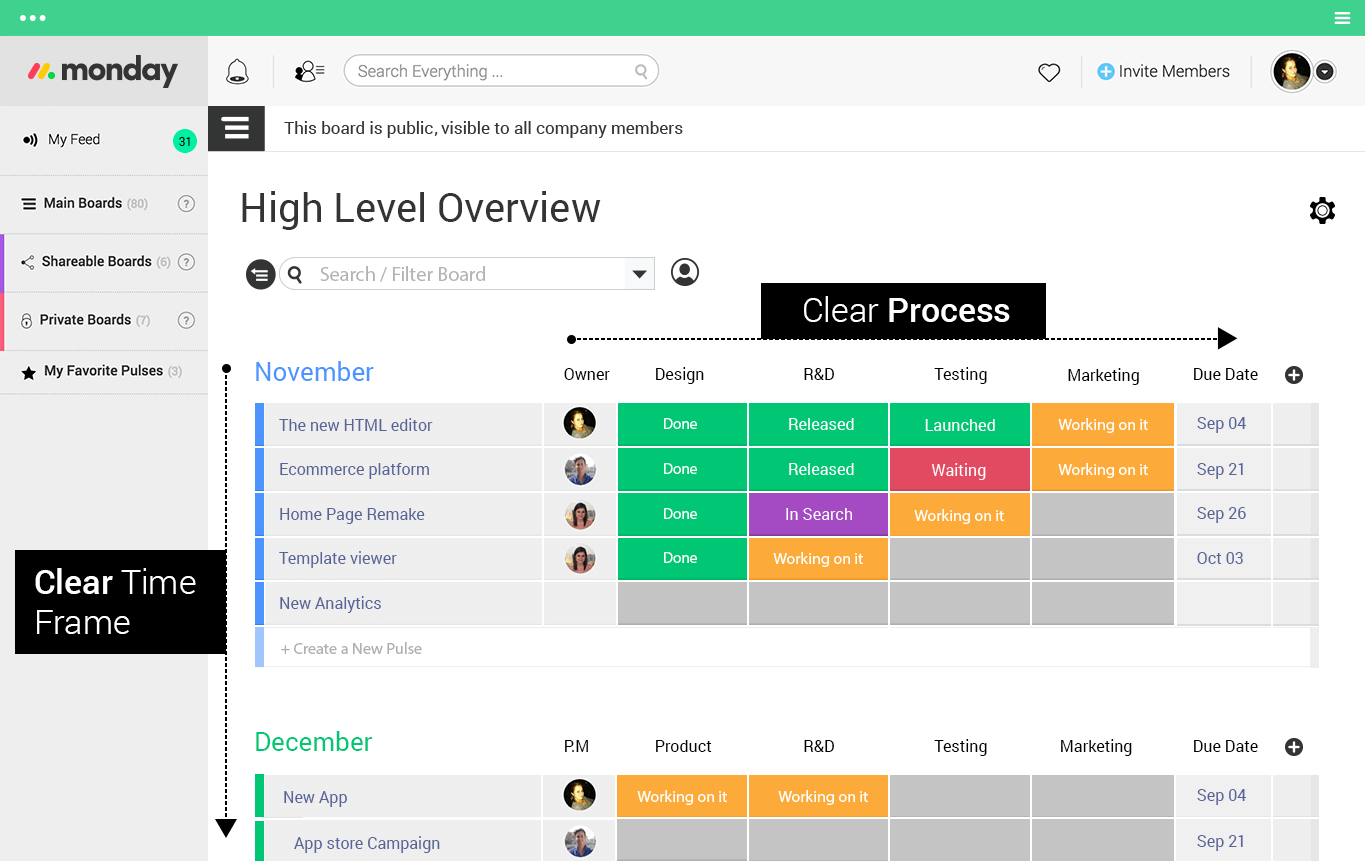 The regular version of Monday.com isn’t too expensive, but it’s also the most limited. As such, you might want to choose their pro plans to get better maneuverability over your company’s projects. Their basic plan is just meant to be used by 5 users and costs $32 a month.

They have a Standard plan, which seems to be the most purchased subscription of their site, and costs just over $52 a month. It does have a ton of added features that the basic plan doesn’t offer, as well as support for other users. Their Pro ($79 a month) and Enterprises (around $155 a month) are also very popular plans, but the amount of features that they come with makes them very expensive.

Their two top tier plans also grant your Monday.com site with unlimited storage, and invaluable features for projects that require a ton of uploading and downloading.